Warning: "continue" targeting switch is equivalent to "break". Did you mean to use "continue 2"? in /homepages/3/d724373685/htdocs/clickandbuilds/SnazMusic/wp-content/plugins/siteorigin-panels/inc/styles-admin.php on line 390
 GET STUFFED – Tony Bartolo talks to Miles Hunt of The Wonder Stuff who has just returned from ‘Rubbish Island’ – Snaz Music
12 SEP

Now that the obsession with X Factor wannabe Pop Idols is over, it’s time to take a look at a band who, before grunge and Britpop, headlined the Reading Festival above Nirvana, had countless chart hits, a large loyal fan base, and a number one hit with comedian Vic Reeves. It was achieved by continuous gigging, strong songs and just plain hard work.

As The Wonder Stuff unbelievably enter their third decade they return with their third album in eleven years. Escape From Rubbish Island retains that old school anthemic quality and isn’t afraid to wear its heart on its sleeve.

I meet with a refreshed and rejuvenated looking Miles Hunt at the Premises Studio in London’s East End where the frontman is currently rehearsing for a mini-tour that concludes at the London Astoria. I wonder just what the motivation is for The Wonder Stuff reunion? “I just make records because I don’t like what I hear on the radio,” says Miles matter-of-factly. “I don’t like what’s on music TV and I don’t expect the music press to like what we do. I just love writing songs that shoot for a chorus.”

“We’ve always been an incredible live band and I guess that’s been reflected with our loyal following. We could just do a reunion tour every Christmas but we don’t want to take the piss out of our audience, we respect them too much for that. By having a different bass player and drummer it doesn’t detract from what The Wonder Stuff was. I just love playing with musicians who really love playing. I like writing in a band environment in the studio and get inspired by other people’s playing.” 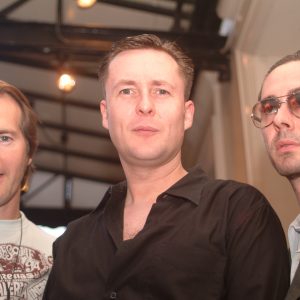 So how does Miles feel about the current state of the music scene? “I went to see The Killers recently. I thought they were interesting, the songs were good, they played well but there was something lacking. It just seemed too early for a band like that to be playing larger venues. When we started out our heroes were The Clash, The Buzzcocks, and The Pistols. I’m afraid there’s not a lot like that around at the moment.”

The band seems to have given him a new lease of life. But what does Miles want to come out of The Wonder Stuff’s new incarnation? “Having had 10 years of trying various other projects, I almost wanted my passion for writing and playing to go away and to think of something else to do. At my age it’s like an illness – if I tried another career I’d still be wishing that I was playing and recording. Having done the reformed gigs for the last four years, this was the next logical step. I think The Wonder Stuff were a great live band and we have a new batch of songs that go with the old ones: they seem to fit in well. Success to me is about the music, about writing the next great song. Our idea of success was not to get a job or be on the dole, that was out motivation. I don’t have great expectations for us from the media. I really hoped internet radio would be bigger than it is right now, as British radio is still awful. It’s just another version of censorship: narrow playlists and picking records they want to play, not catering for minority tastes.”

If the recent secret gig at the Barfly is anything to go by, The Wonder Stuff will soon be reaching the majority with a new batch of songs that definitely rival their classics.

(The single ‘Get Ready For A Fistfight’ is out in early October. The album ‘Escape From Rubbish Island’ is out now on Independent Records. The Wonder Stuff play the London Astoria on October 12th)

Tony Bartolo talks to the Alabama 3 on miscarriages of justice, outlaw blues and the Great Train Robbers. In the dark depths of the wild...