Tony Bartolo talks to the Alabama 3 on miscarriages of justice, outlaw blues and the Great Train Robbers.

In the dark depths of the wild west – actually a dingy basement in London’s Soho – I chew the fat with groovemeisters Rob Spragg (aka Larry Love) and Jonny Delafons (aka LB Dope) about their forthcoming benefit show at Shepherd’s Bush Empire in aid of M.O..J.O (Miscarriage of Justice Organisation). Special guests include former Pogue Shane McGowan and punk poet John Cooper Clarke. The boys tell me that the legendary Rolf Harris may make an appearance. 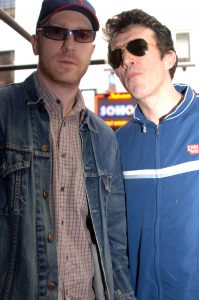 So just how did this benefit show come about? “M.O.J.O. is an organisation which deals with the problems of prisoners who have been victims of the system,” says Rob. “Our band name, Alabama 3, is a reference to the likes of the Birmingham Six, the Guildford Four and so on. About five years ago a mate of mine got sent down and the same week I met an interesting guy

called Paddy who happened to be Paddy Hill from the Birmingham Six. As a victim of miscarriage of justice himself he had dedicated a lot of his time to helping others who had found themselves in the same position. I began to take a lot of interest in the work he was doing helping other prisoners and we’re happy to be involved with guys like that who are full of integrity. “Rob continues

: “In 20 years’ time everyone will know someone, directly or indirectly, who has been in prison. Women’s prisons have never been so full as they are now with all these needless draconian laws that are around.” Drummer Jonny interjects: “I was reading today that this Government wants to bring in American style chain gangs in orange boiler suits, which I’m sure will be adopted by the kids as some kind of fashion statement.”

What with today’s rock stars championing causes from the rain forest to Red Nose Day, some cynics may feel that there’s a certain amount of self-interest from those celebrities involved, who may have one eye on a knighthood further down the line.

“M.O.J.O. is something we strongly believe in,” says Rob firmly, “but we don’t want to hit our audiences with all this preaching like some Sting or Bono thing, we want the girls to be dancing and feeling sexy and everyone to have a good time.”

I move on to the theme of current album Outlaws. “Well there is a definite outlaw theme,” admits Jonny. “Former great train robber Bruce Reynolds wrote a piece for it on the album and his angle is that an outlaw doesn’t have to be a criminal. It could just as well be an anti-establishment viewpoint. He sees artists and musicians as carrying the flag now more than criminals.”

Rob says: “I met Bruce at Clerkenwell Literary Festival and his view was that there is no history in our culture to compare to the Americans in the tradition of Jesse James or Billy the Kid. In fact when he was on the run he would deliberately take some of the same routes the Great Train Robbers in the States did to get a feel of their history. I’m not condoning what Bruce has done and neither does he. He has just used his past and become a better and more articulate man for it.”

The album Outlaws is out now.

(The gig was on May 29th at Shepherd’s Bush Empire with Shane MacGowan and the Pogues. Alabama 3 were also to perform at Glastonbury on June 24th-25th.)

Now that the obsession with X Factor wannabe Pop Idols is over, it’s time to take a look at a band who, before grunge and Britpop,...