Warning: "continue" targeting switch is equivalent to "break". Did you mean to use "continue 2"? in /homepages/3/d724373685/htdocs/clickandbuilds/SnazMusic/wp-content/plugins/siteorigin-panels/inc/styles-admin.php on line 390
 ALABAMA 3 FORUM 31st MARCH 2018 – Snaz Music
06 JUL

South London collective the Alabama 3 crossed over to the other side to north London’s Forum to spread their brand of harmony and destruction to a much loyal and devoted gathering of all persuasions. Frontman and original mainstay Larry Love enters on a wheelchair in hospitable garb and IV drip and the rest of the line up congregate to their respective positions ready to spread the gospel that is Alabama 3 and has been for over 3 decades. For a band that has never been in fashion there is no baggage to carry and if anything much of what they are and represent is based solely on vibe and feel. The music and the showmanship is erratic but that is the beauty of what they do and marks them as an unrequited law unto themselves. Something their hardcore following has bought into over the years. 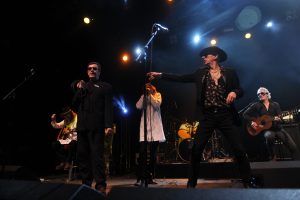 “Woke up this morning” the perennial chestnut from the long running Sopranos TV series that will indelibly be linked to the band was given an airing as one might expect as was near hit “Johnny Cash” and some of the new material seemed to go down well with an audience that transcends the meaning of devotion. The whole concept of the Alabama 3 module is the same as when it started. Party and have fun and to hell with the mainstream.