Warning: "continue" targeting switch is equivalent to "break". Did you mean to use "continue 2"? in /homepages/3/d724373685/htdocs/clickandbuilds/SnazMusic/wp-content/plugins/siteorigin-panels/inc/styles-admin.php on line 390
 THE DAMNED – KOKO FEBRUARY 16th 2018 – Snaz Music
24 APR

42 years from Punk pioneers, Psych crossover to Goth merchants the Damned have survived the travails of a music industry that has eaten up many a band. Original members Captain Sensible and Frontman Dave Vanian celebrate the journey in a party atmosphere to an adoring crowd. 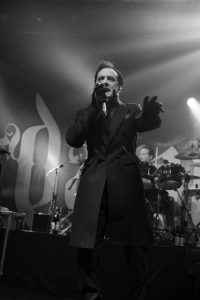 This may well be a trip down memory lane but with a new album Evil Spirits to promote produced by Bowie/Bolan legend Tony Visconti all the signs are that the Damned are having one hell of a resurgence. The new songs blend in seamlessly with the classics and the energy levels constant. Monty Oxymoran on keyboards does a great impression as the mad professor bolstering the sound to new levels. The return of Paul Gray on bass supplements the sound keeping the whole thing together while Captain Sensible aka Raymond Burns is allowed the freedom to go wild on guitar something he seems to revel in completely. Dave Vanian ever the consummate professional is a master showman who interacts with the audience and knows how to deliver. 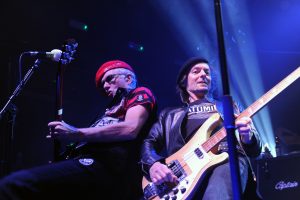 “Smash It Up” is a much underestimated masterpiece in the Damned back catalogue and sits well with the classics “New Rose” and “Neat Neat Neat” all of which relentlessly crash and burn the set to another level. Often seen unfairly as a comedy punk band in comparison to their peers the Pistols and the Clash the current line up have a hunger and energy the formerly mentioned acts long lost. The humour is still there in parts and the Plastic Bertrand/Elton Motello Hybrid cover of “Jet Boy Jet Girl” amplifies that to a degree but wasn’t Punk supposed to fun and escapism? Tonight the Damned brought it all home.
Reviewed by Tony Bartolo 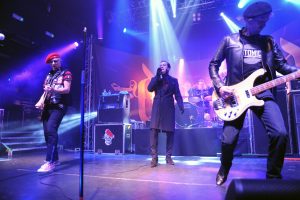