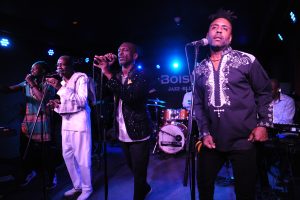 Yesterday was the launch of the British Collective’s five-day Live performance at the lively and chic music venue Boisdale in Canary Wharf, London with a live band : keys, bass, guitar, drums and vocalists.

Thanks to these four amazingly talented performers, from the get-go, we travelled back to some of the most iconic British soul anthems such as « Family » by Noel Mckoy, « Unbreakable » by Don-E, « There’s nothing like this » by Omar and « Mama used to say » by Junior, to the authentic sound of British Soul music spanning over 30 years, a real treat.

These four artists who are true legends of British Soul Music have sold millions of records worldwide and won many notable industry awards. Individually, they are hugely successful artists but together as the British Collective, you have a dutch pot of different vibes. It’s an incredible fusion of Carribean and English influenced RnB.

The British Collective released the 1st volume of their album in 2016, a mix of RB & Soul.

Their set last night included many of the songs from their 1st album : The Renaissance Begins released in 2016, such as « Romantic » and a « Piece of Heaven » which are the 1st and 2nd single of the album and pop orientated arranged songs. Shooting the 1st single big video in Crystal Palace actually led on to this artistic collaboration, where the 4 musicians would commit to compose and do the vocals of two songs each to produce an album. Hence, « Take your time » was written by Noel McKoy. It is a Lovers Rock song reminiscing the music scene they all experienced in the 80s and 90s including reggae sounds. Remember that the core members of the group all have Jamaican parentage and their West Indian musical heritage influences the sound of their RnB. Their style could be summed up as « the heartbeat of Reggae expressed in soul ». Other album’s tracks such as « That’s why ! » written by Don E and his brother for Omar has got a latin swing to it.

The icing on the cake was the Live performance of their soon to be released New Single « So ready », a Slow Jam that will melt the hearts of most ladies out there.

In other words, make sure you attend one of the Live Performances at Boisdale this week. The British Collective will be performing every night until Friday 23rd November !!! Not to be missed !!